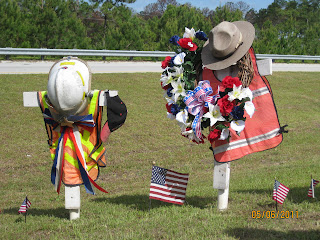 On day number six the FLETC Long Riders left Wilmington, NC under clear skies and a tail wind for a change. We went up Route 17 with a police escort until we stopped near Topsail Beach where we picked up more escorts from area jurisdictions. After entering Onslow County we stopped and were joined by the local chapter of the Blue Knights MC and a local bicycle club. There were two really interesting bicyclists in the group. Bob Newsham aged 70 years and Dan Sosa aged 79 years young. Dan rode his first century last Monday (100 mile ride) after having a hip replaced. Next week when the rest of the guys get to the LEU ride I hope they will remember the accomphishmants of these men. Bob rides with the name of a police officer killed on 9/11 painted on his bike. We stopped along Route 17 where Deputy Steve Boehm and a Varona firefighter lost their lives in 2008 when they we hit by a tractor trailer while directing traffic. The ride stopped for lunch at Onslow County Sheriff's Office Headquarters in Jacksonville. After lunch we rode to Kinston, NC where we encountered rain showers about 4 miles. We tried to outrun the storm by riding at 27 mph pace but came up short. At the hotel, the mayor of Kinston and members of the local law enforcement memorial association greeted us at the hotel. all told...88 miles at a 18.7 mph pace.  Tomorrow we have a 100 mile day planned with a finish in Edenton, NC.
Posted by dwightsaddlesore at 7:31 PM