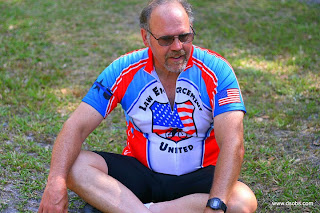 Below is a link to a press release from the Louisiana State Police regarding the accident involving FLETC Long Rider Rob Moorhead.

I don't know how much y'all may have known about Rob in the short time he was with us, and how many of you have read the CBP press release, but to summarize (and to include some other info I know):: Rob served 26 years of active and reserve duty in the US Marine Corp, primarily as a roto-wing pilot. He served in Desert Storm and retired as a Lieutenant Colonel. He had joined the U.S. Customs Service in 1987 and was stationed in their Air and Marine Branch as a pilot. He flew various helicopters as well as some aircraft. Although born and raised in Maryland, he went to college in Louisiana and lived there after graduation. He leaves a wife of 25 years, Julie, and their 4 children.  After retiring from U.S. Customs, Rob worked as a heli-pilot for a medical evacuation service.

Even after his death, Rob was helping people - as per his wishes, his wife donated his organs. So, there are people living today who are thankful towards a man they never met. I can tell you from the 4+ years we have participated in the FLETC (& PUT/LEU) ride with Rob - that beneath a gruff exterior he was all about helping others.
Posted by dwightsaddlesore at 4:51 AM