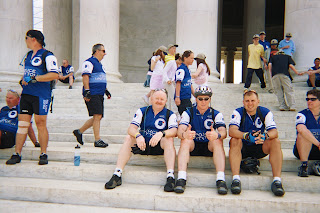 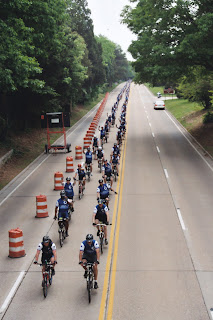 I have been asked many times about why I would ride a bicycle so far for any reason. I guess I will answer that with a little history lesson. I became interested in cycling way back in 1989 when the mountain biking craze started to get going here on the East Coast. I was working a second shift job in the graphic arts field and could not play volleyball or softball leagues anymore due to scheduling.  I rode offroad exclusively not wanting to be apart of the "roadie" cycling scene and their tight bike shorts. I continued this trend until 2002, when I participated in a memorial ride on the first anniversary of the 9/11 terrorist attack on the United States. This ride was organized by fellow law enforcement officers from Northern Virginia. If I remember correctly, there were approximately 300 LEs, fire personnel, and medical staff who participated in this ride. We started out in Battery Park in N.Y.C. and spent the next four days riding through N.J., DE, MD. and arriving at the Pentagon on September 11, 2002 early in the afternoon. To this day "The Ride to Remember" was the most organized ride I have participated in.
In 2004, I heard about a ride called the Police Unity Tour. I walked down to Route 1 and watched a couple hundred LE cyclists ride by on their way to Washington D.C. They were riding to honor the memory of fallen LEs. What a cool way to pay tribute to these heroes. Little did I know that the next year I would be joining them.
In 2005,  Deputy George Malcolm, a deputy sheriff from Fairfax County who had been a LOD death 100 years ago was being honored by having his name added to the Law Enforcement Officer's Memorial in Washington, D.C. that year. I was working at the ADC one day when the Vice President of the Deputy Sheriff's Coaliton asked me if I was riding in the Unity Tour and I said  I had not considered it. He asked me to think about it as the Coalition thought it would be a good idea to have a participant in the ride to honor Deputy Malcolm's memory. Since it was already March and way past the deadline to sign up, I contacted the PUT VA President Scott Humphries inquired about joining up. Initially he said that I could not ride because funding would have to be raised on such short notice. When I said the Coalition's check would be in the mail the next morning, I was in.....That year, another deputy and myself rode our first tour. In the 6 years since that first tour, our team has averaged 13 members either riding or doing the tough support jobs of the tour. Our team has collectively raised over $60,000 for the memorial in DC and now for C.O.P.S. and ODMP.  In 2009, I was honored by PUT Chapter IV for riding 5 years and 1250 miles.
In 2010,  I decided to join a group of LEO cyclists who were raising money to honor fallen officers in another way. This organization is called Law Enforcement United and all the money raised goes to support two organizations Concerns for Police Survivors (C.O.P.S.) and the Officer Down Memorial Page website. Last year our donation funded the survivor's camp held in Wisconsin last July. Since then the family of a VA. State Trooper who was killed in the late 1980s donated 170+ acres in Amelia County, VA to build a camp here for use by the survivor families of line of duty deaths. We hope to break ground in 2016-17.
I will turn 50 years old in May and decided to do something big to celebrate. I have decided to ride with the Federal Officers of the LEU on "the Long Ride" from FLETC in Brunswick, GA to Cheapeake, VA where they will link up with the rest of the LEU and ride on to the Pentagon in Northern Va.
All totaled up, approximately 1100 miles give or take......stay tuned.

Posted by dwightsaddlesore at 9:42 AM