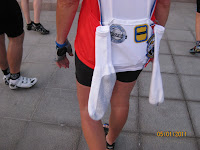 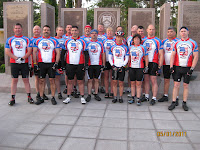 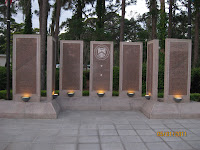 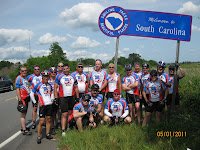 The first day of the "Long Ride" started at 0630 at FLETC, Brunswick, GA. We had a short memorial service at the FLETC Chapel and Memorial Wall and were piped out by a Border Patrol bagpiper. We rode out of FLETC and headed north through several small towns and worked our way to Bryan County GA for a memorial for a officer killed in 2006 by a drunk driver. We were greeting by his widow and the President of C.O.P.S. in Ga who drove from Atlanta to be there. We continued  north to a F.O.P. lodge where we were treated to lunch. The afternoon portion of the ride took us through Savannah, GA with the huge Oak trees with Spanish Moss hanging from them. We crossed into South Carolina at approximately 1600 hours and finished up today's leg in Hardeeville, SC. Total mileage for the day was 101 miles.
Posted by dwightsaddlesore at 6:11 PM