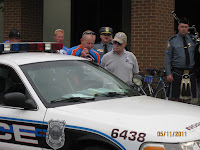 Today's leg of the 2011 "Ride for Hope" started off in Richmond, VA at 0830.  We traveled through the streets of Richmond with a police escort at a nice pace. Stretching out the legs after the 109 mile day on Tuesday. The first memorial stop was at State Police Headquarters in Henrico County where Officer Andre Booker was remembered. After leaving this stop we took a break in Doswell before stopping for the annual peanut butter and jelly sandwich and fresh strawberry lunch in Ladysmith. This is an LEU tradition. In Spotsylvania, VA we stopped to remember Deputy Dean Ridings who was a 2010 LODD, His son, who is a Spotsylvania deputy sheriff is riding with the LEU this year to honor his dad. From there the riders went to the Fredericksburg, VA police headquarters for a memorial to their officers. My mom and several of her friends were there to greet me when we arrived. It was nice to see familar faces. Next stop was Stafford County, Va and as everyone in LEU knows, Stafford County comes out in force to welcome us. EVERY intersection was covered with a deputy, overpasses had signs, and along Route 1 placards were placed with the name of each LODD from last year. The fire department had a flag hanging form a ladder truck at the entrance to the government center. Their ceremony included a wreath laying and "taps" played from the rooftop. From this point it was a 4 mile ride to the hotel and the last night most of us will stay together as we are close to home. Tomorrow we have a late start, as not to conflict with another group of cyclists from Florida using the same roads. We ride into Prince William, Fairfax, and Alexandria before finishing at the Pentagon. 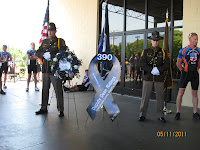 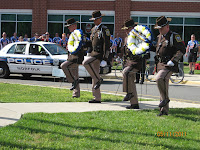 Posted by dwightsaddlesore at 3:21 AM