Well day number three started off very well. We were escorted over the Arthur Ravenel Bridge. This is a new suspension bridge that is bike friendly. We were joined by members of the Manning SC Police Department who road with us from the start to almost Georgetown. They will rejoin us in Chesapeake for the LEU ride to DC. We traveled onto Munck's Corner, SC and Berkley County Courthouse where we met members of SC C.O.P.S. who's president is the mother of Trooper Mark Coates who was killed in 2002. Lunch was served by the F.O.P. which was very nice.
We traveled from Munck's Corner to Georgetown where we were greeted by the Chief of Police Paul Gardiner. The police department served us dinner and the chief actually served us sweet tea and cleared dinner dishes! Ahh the south, you would never see that up north. Desserts were made by survivor family members. Tomorrow morning we don't have to leave till 0720. The Georgetown PD is hosting us for a southern breakfast with grits! 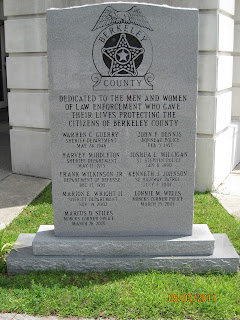 After breakfast, we head off to Horry County, Myrtle Beach, and North Myrtle Beach
Posted by dwightsaddlesore at 6:41 PM