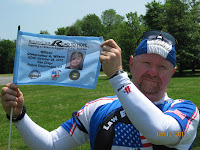 Day 12 of my ride from FLETC to the Pentagon outside Washington, DC. Today was the last day of actual riding for the 2011 "Ride for Hope". At 0930, approximately 300 riders started out on the last part of the tour for this year. We rode up Route 1 with a big escort of motors and cruisers to hold the intersections for us. Many riders were tired from the 3 day trip from Chesapeake but they continued to ride their hearts out. Our first stop was at the Marine Corps Museum near Quantico, VA. This is always a favorite stop for all the "Devil Dogs" on the ride as the gather for pictures. After the break we road up through Prince William County past a warm welcome form the Eastern District of the Prince William County Police. Next up was Fairfax County and homebase for alot of the riders. We were met by the award winning Fairfax County Sheriff's Office Honor Guard at the county line. They looked very sharp coming off their win at the Police Week Honor Guard Competiton. Special thanks goes out to the FCSO civil enforcement branch who had all the intersections cleared for us from the county line to the GW Parkway.
After passing Mount Vernon, the home of our first president, we continued to Fort Hunt Park where were greeted by many familiar faces including many of the FCSO Command Staff. It was nice to see such support from my agency after being gone almost 2 weeks. The NOVA United Riders greatly appreciate the support we get every year from our agency. After a nice lunch, we headed up through Alexandria, VA and through the roundabout at the Memorial Bridge to the headquarters of the DEA for a piping in from the "Black and Gold" pipe and drum unit from DEA. They are a very impressive group to watch and listen to. 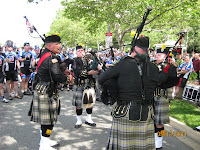 We were on the bikes one last time "officially" as we rode over the the Pentagon for the arrival ceremonies. Were we cheered on by many family members and friends as we took those last few pedals. The riders were greeted by the Boards of C.O.P.S. and ODMP and checks were donated in the amount of 135,000 and 50,000 to each organization. Not bad for a bunch of LEs in only their second year. Once all the ceremonies were over, about 20 riders decided to ride to the memorial in an "unofficial" group. Due to politics we are asked not to ride to the NLEOM so we ride as individuals to pay our respects.  I found the name of the officer i rode from GA some 12 days ago on Panel 11 on the east side of the memorial. I made 3 etchings of his name for his family whom I will meet on Friday. After spending a few minutes to reflect on the ride, we headed back to our hotels and some of us back home. 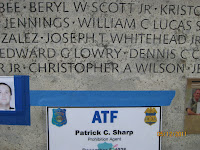 Posted by dwightsaddlesore at 3:31 PM