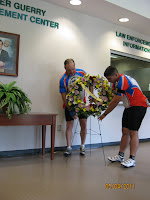 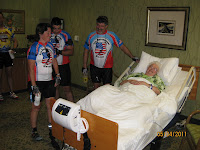 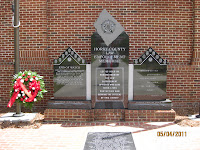 Well today marks the midway point of the FLETC Long Ride. We started out the day with a short ride from the hotel back to the Georgetown Police Department we were treated once again to the hospitality of this nice community. The Chief of Police treated us to breakfast of scrambled eggs, ham/sausage biscuits, and GRITS!
This is a very small department and they were gracious hosts. One of their captains was in the kitchen at 0600 to get this ready for us. Thanks again!
After breakfast we held a memorial wreath laying in their lobby with a few words form the Chief and our traveling chaplain Eddie Hill from Horry County, SC Sheriff's Office. Eddie is a great man and has rode with us from Brunswick GA. We left and stopped at a nursing home to visit Mrs Doris Scarbough- Owens who's father, Henry Scarborough was the first LODD in Myrtle Beach in 1949. He was on his first day on the job in a borrowed uniform and gun and was killed by a prisoner on a transport within the first 8 hours on the job.
After leaving the nursing home it started to rain on us but thankfully only briefly. We arrived at the Myrtle
Beach in a drizzle and they greeted us with cheers and clapping. Their honor guard placed a wreath at the memorial to their LODD officers. We were then off to Horry County where we encountered the worst head winds of the trip a sustained 20 mph wind which is very difficult to ride into. We all took turns leading the pace lines for the 14 mile trip to Horry County, After lunch and ceremony at the courthouse, we headed in the direction of North Myrtle Beach and a nice hotel on the beach. Tomorrow we go towards Wilmington, NC a ride of approximately 108 miles.
Posted by dwightsaddlesore at 5:50 PM