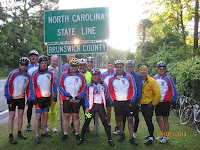 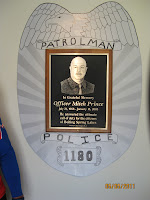 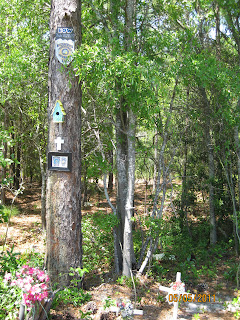 Today we got on the road at 0640 hours and a whopping 45 degrees. With riding at a 20 mph pace the wind chill was down in the 30s. We crossed the sate line into North Carolina at about 0715 and stopped for a picture. After on rest stop we continued to Boiling Springs Lakes, NC where we stopped to honor one of the fallen officers. They had prepared us a bag lunch and sent us on our way. We traveled to a ferry crossing and rode water transport to a landing near Kure Beach, NC. Once back on solid ground the FLETC Long Riders and several local police officers rode to the place where Wilmington Police Officer died in a pursuit in February 2009. His name is Rick Mathews and he rode the long ride in 2008. He had a moment of silence at the place he died and we next travled to the Wilmington Police headquarters for a bigger memorial and wreath laying. The local news covered the service. From the headquarters the riders went to the hotel and called it a day after 97 miles. The next two days will be over 100 miles each day.
Posted by dwightsaddlesore at 7:01 PM